One, among the many negative consequences of the national disaster known as Donald Trump, is the reported rise in the rate of insomnia among Americans. Even before the election, therapists from New York to Los Angeles were reporting a spike in incidents of anxiety along with its companion comorbidity, insomnia.  Now that the red button of death sits just under the stubby index finger of the personification  of a pathological trifecta of a lying, paranoia, and megalomania, sleep has become so elusive, that only the memory of that soothing state remains for many suffering from a condition so pervasive that it has its own name, Trumpsomnia. Those suffering from this debilitating condition frequently resort to prescription medications such as Alprazolam only to find it unsafe to increase the necessary dosage as quickly as Trump ramps up his insanity. For those who find no relief in massive doses of Xanax, experts are now recommending ANNEX, more specifically ANNEX 3-72 Nuclear Operations.  While this potential cure is available without a prescription, it does require the use of a certificate. In order to use ANNEX 3-72, one must first install a DOD Rootkit on their computer. This is a package of certificate known as DoD Medium Assurance and Class 3 Root Certificate Authorities, and it allows one to surrender anonymity in exchange for access to sensitive by not classified military information.

ANNEX 3-72 is just one of many documents related to Core Military Doctrine housed at the Curtis E Lemay Center for Doctrine Development and Education. One may reasonably question the advisability of getting sleep aids from a place named after the author of such famous quotes as “We should bomb Vietnam back into the stone age.” Just remember, desperate times call for desperate measures, and hidden in this repository of arcane military doctrine are glimmers of hope that act like cognitive injections of solace to ease the mind and soothe the soul.

For instance, under the title of Basic Doctrine such reassuring statements as this: “Centralized control may be manifest at different levels within a combatant command depending on how the air component(s) is (are) organized and the nature of the supporting C2 architecture (functional or geographic). 1 Also, due to the dynamics of the operational environment, control over some capabilities may, over time, shift up or down the command chain according to changes in priorities.” (Emphasis added). Admittedly this aphorism in bold does not pack the same wallop as say a Quaalude, but it does offer the first glimmer of hope that we are not totally locked into some Dr. Strangelove scenario just because our commander in chief is crazy. Here we have in black and white, proof that while only one person can say “yes” to a nuclear strike, other can still say “NO!” Control can shift down the chain of command according to changes in priorities. If the Cheeto Bandito from Mar-a-Lago decides that his priority is “to send the globe spinning into an orb of desolation”, other in the chain of command may be free to misinterpret that priority to mean “to preserve some semblance of human life on earth”. In such a case, lower echelon commanders appear to have the authority to turn off the rocket engines.  Admittedly that is one hell of a lot to infer from such a banal-sounding clause but is should be enough to send the reader on a search for other clues to be counted like sheep until sleep arrives.

This search will eventually lead the sleep deprived reader to this slumber-inducing gem: “…the President may direct the use of nuclear weapons through an execute order via the Chairman of the Joint Chiefs of Staff to the combatant commanders and, ultimately, to the forces in the field exercising direct control of the weapons.” In other words, the President is the only one who can start the train down the tracks to Armageddon, but he can’t actually push the button. That job is assigned to the Missile Combat Crew.  Unfortunately, at this point, sufferers in advanced stages of Trumpsomniacs, may experience a condition known to experts as “Holy Shit Syndrome”. This usually occurs when they recall the following Denver Post headline from 2014:

This was the story about how “This string of leadership lapses has beset a force that remains central to American defense strategy but in some respects has been neglected. The force of 450 Minuteman 3 nuclear missiles is primed to unleash nuclear devastation on a moment’s notice.” People suffering from HSS frequently find relief from this debilitating condition by breathing deeply into a brown paper bag until they just pass out. Patients report that while this option is fraught with side effects like sudden cardiac arrest or cerebral hematomas these are still preferable to thinking about Trump.

Patients with more moderate forms of the disorder may find relief by following the hyperlink in 3-72-D30-NUKE-OPS-NC3.pdf for the term EXECUTE ORDER. Admittedly, “execute order” is not a word pair specifically designed to induce somnolence, nevertheless, the link takes one to this comforting definition:

As an additional aid to sleep, a significant number of respondents report good result produced by staring at the following illustration until they lose consciousness. 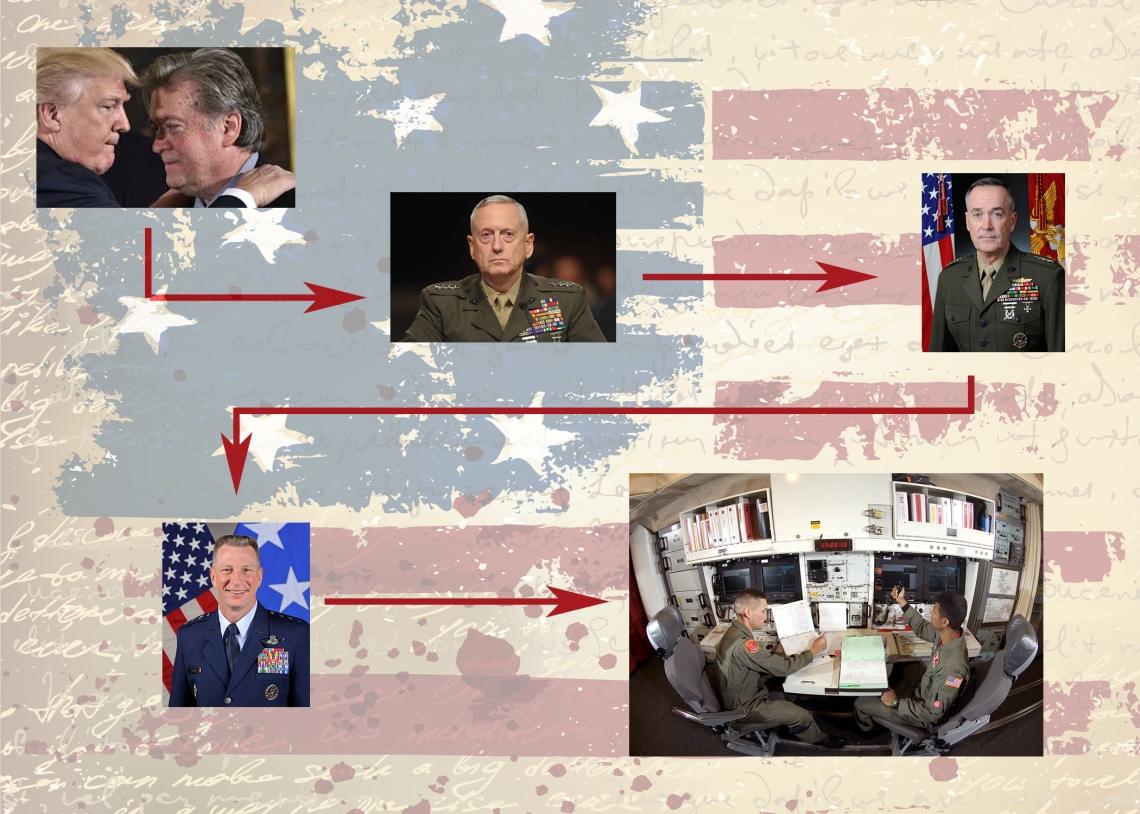 Unfortunately, an equally large group reports this only makes them want to vomit.

To put names with this enterprise, one could say, that to initiate a nuclear strike, Donald Trump’s order would be passed to James Mattis, who in turn needs to authenticate it and pass his authorization on to Gen. Joseph F. Dunford. From there the order goes to Lt Gen John L. Dolan Director of Operations (J3) who relays communications between the President and the Secretary of Defense to the combatant commanders. While each of these men mentioned by name above is expected to follow legal orders, the much vaunted Two-man rule, where each officer is authorized to shoot his companion missileer for non-performance, does not appear to become operational until the launch command reaches the level of combatant commanders.  While the primary role of the higher echelons of command is to authenticate an order, it seems that merely by a failure to authenticate they can abort the mission.

If one is experiencing symptoms of Trumpsomnia, it is highly recommended that they stop all further research on this subject now and rest assured in the still unproven hypothesis that in the event of instructions from the president to commence the apocalypse, and event nihilists refer to as “Tweetageddon”, cooler head may prevail.